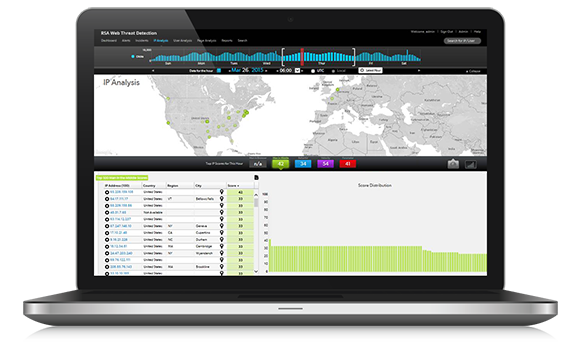 Data breaches have exposed billions of user names and passwords in recent years, leading to a surge in account takeover-cybercriminals taking over consumers’ online accounts or account credentials to make purchases, transfer money or steal their data. Cybercriminals’ account takeover attempts are getting stealthier, but they’re not clever enough to outsmart RSA Web Threat Detection.

Observes everything in the clickstream across users and devices and captures all web and mobile session traffic to make it easier for fraud and security teams to identify the source of fraud faster (potentially in hours instead of days). In just a few clicks, fraud and security teams get access to all session and user data, drastically reducing the amount of time spent on manual reviews.

Applies web behavioral analytics to compare the behavior of cybercriminals and automated attacks against legitimate users.

Deploys on premises or in the cloud.

New and increasingly sophisticated ways to perpetrate fraud are constantly being developed, making it extremely difficult to keep pace with the individual fraud attempts targeting an organization’s website. Organizations consider it a challenge to identify and respond to fraud until account takeover or other losses occur.

Over 70% of organizations state it takes days-or longer-to identify the source of fraudulent activity on their website. This occurs because cybercriminals are able to mask their activities alongside legitimate web traffic. In addition, organizations are concerned with adding new security measures that could potentially impact the user experience.

Web Threat Detection is a versatile platform that can identify even the most sophisticated fraud threats, automated attacks and other forms of disruptive online behavior, including:

RSA Web Threat Detection is a fraud detection platform that leverages a combination of behavioral analytics and rules to identify high-impact fraud threats-without impacting the user or website performance. Web Threat Detection observes everything in the clickstream across users and devices, starting from the moment a new web session starts to the point of transaction and logout.

Review. Web Threat Detection “sessionizes” all web and mobile traffic, allowing easy drilldown into individual sessions and visitors and full visibility into malicious or disruptive behavior. In only a couple of clicks, fraud and security teams can have all session and user data at their fingertips, drastically reducing the time spent on manual review.

Respond. Threat scores, elements from the clickstream and imported data files such as RSA intelligence feeds, including compromised IPs and emails and mule accounts, can be used to enrich, customize and create new rules for improved detection. Data, cases, and alerts can also be pushed to external applications, including email, syslog, case management, analytics and authentication platforms.

Web Threat Detection is part of the RSA Fraud and Risk Intelligence Suite of products that offers numerous points of integration across the portfolio to enhance fraud detection, including: